Summoning is the process of obtaining a monster from the Summonhenge building. It is the main method of acquiring new monsters and for most monsters also the only method. Monsters that can only be obtained via summoning are labeled non-farmable.

Always keep at least one copy of each non-farmable monster, even if it might not be good currently or you simply don't like it. You never know when a buff hits.

In this context (and pretty much always when someone talks about summoning) summoning means only the methods that give you a random monster. Monsters obtained from Monster Summoning Pieces are technically also summoned in the Summonhenge, but since you know the outcome it's basically just a conversion process from accumulated pieces into the real monster and as such not interesting. This means that monsters like the Vampire Lord that can only be obtained via pieces still count as farmable even tho they can not be summoned.

Most scrolls have limitations on which monsters you can obtain from them. In general all nat5 fusion monsters, all Ifrits, Fairy Queen, Vampire Lord, and all Cow Girls can not be obtained via summoning.

Some monsters can be summoned by obtaining a certain amount of Summoning Pieces for that specific monster. The most common cases for this are the monsters obtained from Secret Dungeons or Hall of Heroes.

Exclusive Summons restricts the summon pool to exactly 16 monsters. This pool is refreshed every week at Monday 12:00 server time. The time remaining for the current rotation can be seen in the Summonhenge. You can also click on the little question mark to see the current and next three rotations available.

The summon pool of each rotation consists of:

An example of how the expanded view behind the question mark looks like: 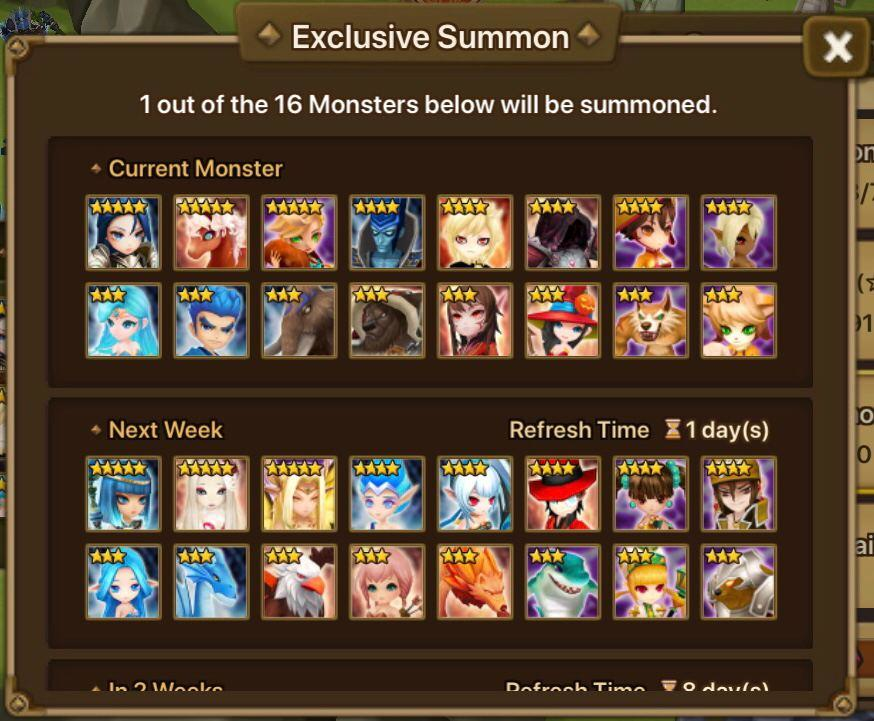 The summon rate for each monster is not equal, your chance of ending up with one of the three nat5s is still only 0.5%.

Below you can find an overview of the nat5s from each rotation so far. Due to historic reasons the first few rotations have not been on a weekly refresh schedule but stayed on for ~2 weeks. Since June 1st 2015 the rotation changes weekly.