Unfortunately Com2uS' terminology is a bit inconsistent. When they say beneficial and harmful effects, they usually mean only buffs and debuffs (the blue/red icons over your monsters in battle). But not always, for example the immunity buff says it prevents all harmful effects but it does not just block debuffs but also attack bar (ATB) reduction and cooldown increases. So in this wiki we use the following explicit notation:

The counterpart to immunity, the "Beneficial Effects Blocked" debuff, does not prevent attack bar increase or cooldown reduction from happening. It only prevents buffs from being applied. This slight imbalance is a deliberate game design choice from Com2uS in order to not make it too easy to completely destroy AI controlled defences even though both of those effects are beneficial in almost all cases. But it does create some of the inconsistencies in the naming in the game.

Up to 10 (de)buffs can be applied on a single monster. If a (de)buff is applied again, the one applied last will replace the existing effect. The only eceptions to this are Continuous Damage, Bomb, and Recovery effects which can be accumulated.

Here is an overview over the buffs currently in the game:

Here is an overview over the debuffs currently in the game:

Freeze is identical to stun when it comes to game play. The only difference is that only water monsters have the Freeze debuff and it prevents the little victory dance animation at the end of battle while stunned or sleeping monsters still perform that.

In order to apply any harmful effect, two stages have to be passed:

If the activation stage is passed then a monster tries to apply a harmful effect. If that happens is then determined by the ACC/RES check explained in detail below. If both stages are passed, then the debuff is applied. 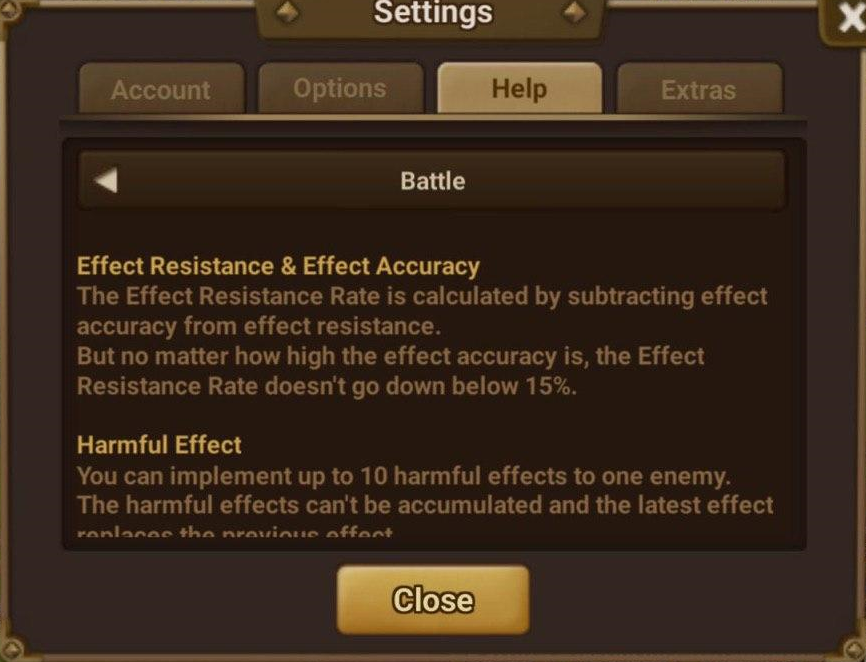 As you can see in this screenshot, the game directly explains how accuracy and resistance are interacting with eachother. Put into a formula it's with p_{resist} being the chance to resist a debuff and p_{apply} the chance of the debuff being applied:

This means that you only need RES - 15% ACC to reach the maximum chance of landing your debuff. Here is a table with the maximum resistance values found in several PvE areas:

The GB12 mid boss has 100% RES for ridiculous historical reasons, so technically you want 85% ACC on your DEF break (Loren).